Pull the spiritual lever on November 4

Politics has had its say.

This candidate or that. He’’s the good one, he’s the evil one.
Or is it vice versa?

As the country gets ready to vote in the longest and most tortuous election in modern times, and certainly the most important, how can we be sure it won’t just be politics as usual? How can we be sure we won’t be disappointed yet again?

Are we crazy to believe again, when we’ve been disappointed so many times before?

The truth is, the current world, the current economy and the current state of terror and uncertainty is a clear and present danger. We want and need the best president ever. Which is where politics goes away, and another system comes into play.

The spiritual system precedes all actions. If we can tap into that energy level, it changes things. Close your eyes for a second and you are there. It’s the place where thoughts start, where visualization occurs, and where energy is drawn down to materialize an end result.

Mozart had entire symphonies in his mind before he ever wrote a note. This is the spiritual system. With a desire of the heart, thoughts are fed, and words become action, and in this way, the supernal power sometimes called God gives us the ability to make or break our lives.

Our desires channel the supernal force where we direct it. Prayer directed at others has been proven scientifically to influence events. The unseen energy of the supernal channeled to those targeted.

So this is where politics and spirituality meet.

We don’t simply choose a president. We wish to empower a president with the supernal help to do what’s right for the entire world.

This isn’t religion. This is the one spiritual system that pervades the universe, the seed of truth beneath all religions. Whatever your faith, religion, belief system, or lack thereof, just use your own way of prayer to connect.

The idea is to channel positive energy to your president.

It doesn’t matter who you vote for. It matters that you vote with the right connection and the right consciousness.  Don’t simply push a button or drop a piece of paper into the voting box.

We can make a change, and we all can make the difference.

Pull the spiritual lever on November 4.

*** You may publish this article in whole on any kind of media, provided that you specify the source as Spiritually.com 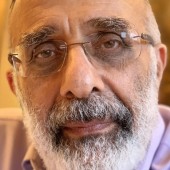